Your water supply: Do you have enough stored in case of an emergency?

After an emergency such as tornado, flood or earthquake, the water that comes out of your tap might not be safe to drink — if it’s running at all. That’s why you should be prepared at all times, which means having at least a three-day supply of bottled water in your emergency stockpile. 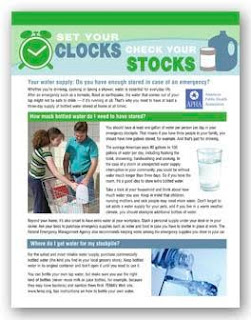 According to a new water stockpiling fact sheet (PDF) from APHA’s Get Ready campaign, everyone should have at least one gallon of water per person per day stored in their emergency stockpile. That means if you have three people in your family, for example, you’d need to have nine gallons stored — and that’s just for drinking. If you live in a warm area or have pets or kids, you should store even more water.

Other tips in the new fact sheet, which can be downloaded now from the Get Ready Web site, include:
• Purchase commercially bottled water and don’t open it until you need to use it. Check your stockpile twice a year to see if any bottles need replacing.
• Don’t stack your water bottles, as that may cause them to leak. Store them somewhere they will be easy to access in an emergency.
• Stockpile water both at home and work, as you never know where or when an emergency will occur.

The new water stockpiling fact sheet is part of APHA’s Get Ready: Set Your Clocks, Check Your Stocks campaign, which reminds Americans to check their emergency stockpiles when they change their clocks for daylight saving time. The campaign information can be used year-round, however, and is a great addition to health fairs or emergency preparedness events. Organizations can customize the fact sheet with their own logos, so take some time to share it in your community today!

Lessons from the H1N1 flu pandemic one year in

It’s been a long year for those of us following the H1N1 flu pandemic and even longer for the health workers on the front lines fighting the flu. As we approach the one-year anniversary of its arrival, what have we learned?

Let’s start with the numbers. Since the Centers for Disease Control and Prevention first began tracking the outbreak in April 2009 through mid-February 2010, researchers estimate that about 59 million Americans were infected with H1N1, roughly 98,000 people were hospitalized and about 3,900 people died from H1N1-related deaths. While the virus was widespread, health officials are relieved that the virus was not as lethal as some feared. Thankfully, reports of H1N1 flu activity have slowed over the last couple of months, although we could experience another wave.

And how about our response? According to a recent assessment by U.S. Department of Health and Human Services Secretary Kathleen Sebelius, preparedness and partnerships have paid off.
"Working with partners in government, industry and around the world, we rapidly characterized the virus, developed a candidate vaccine, made sure it was safe and began production," Sebelius said. "By acting quickly, we made the first doses of the vaccine available in October, less than six months after the flu was identified."

She noted that new partnerships with groups such as schools and businesses helped spread the word about H1N1 flu and the new vaccine quickly, and helped get three times as many health workers out to vaccinate people against H1N1 than for usual childhood immunization efforts. That was very helpful for vaccinating children, one of the high-risk groups. And partnerships with neighborhood clinics allowed the government to create an online flu shot locator that helped people easily find a nearby clinic.

As for challenges? Sebelius said the nation needs safe and effective vaccines that can be developed more quickly and more reliably. Health officials would like to respond to any future crisis within weeks, not months.

Posted by Get Ready Team, APHA at 4:09 PM No comments:

Simple, common-sense behaviors — such as discussing how to prevent influenza at home, covering your nose and mouth when you cough or sneeze and washing your hands often — can help reduce the risk of family members passing the virus on to one another, a new study finds.

For the study, published in the April 1 issue of The Journal of Infectious Diseases, researchers surveyed household members of ill students from the New York City high school where the H1N1 flu outbreak was first documented in April 2009. In households where discussions of flu prevention and transmisson were held, H1N1 virus transmission was reduced by 40 percent.

Study researchers, who were with the New York City Department of Health and Mental Hygiene and Centers for Disease Control and Prevention, said the finding could be especially relevant in the event of a pandemic where a vaccine is not readily available.

Posted by Get Ready Team, APHA at 3:02 PM No comments:

Don’t forget your pets when planning for a disaster

It’s important to remember your whole family when preparing for an emergency, and that includes your furry and feathered family members. You never know when a disaster will strike, so here are some tips from APHA’s Get Ready campaign that you can use to keep your pets safe and happy during an emergency. 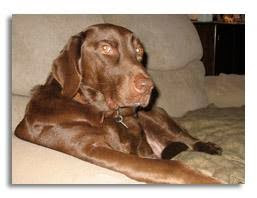 • Know what your community’s plan is for pets. Contact your local emergency management team and ask them where you can go during a disaster with your animals. Not all shelters allow pets, so plan ahead.

• Prepare an emergency kit for your pet. Put the kit into a waterproof container and include food and drinking water, toys, medications, pictures of your pets and up-to-date medical information. Think about supplies that are specific to your pet, such as a litter box for your cat, water conditioner for your fish, bedding for your hamster or a blanket to drape over your bird’s cage.

• Put together an emergency plan with a trusted neighbor. Make sure that she or he can enter your home to take care of your pet if disaster happens while you are at work or away from home.

• Get your pet microchipped. That way, animal shelters will be able to scan and identify your pet during a disaster and reunite you. Make sure the microchip registration information is up-to-date with your current phone number, including your cell phone.

For even more tips, download Get Ready’s fact sheet on pet preparedness supplies (PDF). Or check out our exclusive interview with Scotlund Haisley, senior director of emergency services for the Humane Society of the United States, as a Q&A or a podcast.

Get Ready Mailbag: How is the H1N1 vaccine made?

Q: How is the H1N1 vaccine made? Does it work the same way as the seasonal flu vaccine?
The 2009 H1N1 flu vaccine is made by the same manufacturers as the seasonal flu vaccine we’re all used to, and the same way. The H1N1 virus is grown in an egg and is then made into a shot or a nasal spray. To make the shot, the virus in the egg is killed. The nasal spray, on the other hand, carries the live, weakened virus. The shot is given with a needle and is usually injected into the arm, while the nasal spray is — you guessed it — administered up your nose.

Once in your body, the H1N1 vaccine works just like other vaccines do. After you are vaccinated, your body is tricked into believing that you have the virus, and your body produces an immune response to it. About two weeks after getting the vaccine, antibodies will develop in your body to protect you from H1N1. So if you are later exposed to H1N1, your immune system will respond with antibodies that fight off the infection and keep you from getting sick.

If you haven’t yet received your H1N1 vaccination, it’s not too late. According to the Centers for Disease Control and Prevention, influenza activity can occur as late as May. More than 40,000 confirmed hospitalizations and 2,000 deaths have occurred from H1N1 since August, so it’s still a good idea to get your vaccination. Chances are your local grocery store or drugstore has a supply of the vaccine on hand, so stop by the pharmacy the next time you make a shopping trip.

Posted by Get Ready Team, APHA at 2:23 PM No comments:

What to do when your house floods: A real-life preparedness tale

For Christy of Arlington, Va., one late night last April was especially memorable. Awaking unexpectedly in the middle of the night, Christy found that her basement bedroom was filled with water as high as her bed. 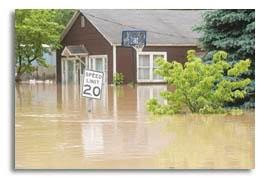 The drain outside the back door of Christy’s bedroom was clogged, and rainwater had been collecting for six hours as she slept. According to Christy’s roommate, Tricia, "it was only when she kicked off a sock off the bed and heard a splash that she realized something was wrong."

"Christy knocked on my upstairs bedroom door at 4 a.m., and we jumped into action to help salvage what we could of her possessions," Tricia told APHA’s Get Ready team recently. "In the meantime, the water swelled to two feet high."

Luckily, the two roomies were able to reach a 24-hour emergency plumber, who snaked the drain and removed the clog, which turned out to be a dead squirrel. (Yuck.) The water quickly subsided, but the cleanup and recovery were just beginning.

As this wet (and messy) story shows, you don’t have to live in a flood plain to be at risk of a flood in your home. Water can enter your house from broken pipes, clogged gutters and sewage drains, heavy rains or melting snow. Should your house flood, know what steps you should take to protect you, your loved ones and your possessions.

Here’s a few tips you can use:

• Once a flood occurs, remove the water as soon as possible. If you have a large amount of water and there’s no drain, use a sump pump.

• Once the water subsides, open doors and windows to let the moisture escape and use fans to help dry out the house and prevent mold.

• If you are working in potentially contaminated areas, wear appropriate protective clothing and respirators. Wash all clothing and body parts that may have come in contact with sewage or other contaminants.

For more helpful flood tips, download and share the Get Ready campaign’s flood fact sheets, (pdf) which are available in both English and Spanish.

"My housemates and I now have a flood detector that sounds should water collect on the basement floor, and we’ve installed a protective cover over the back drain to prevent future clogs," Tricia said. "If there’s one thing we’ve learned, it’s no fun to wake up to a wet, flooded house."

Posted by Get Ready Team, APHA at 3:18 PM No comments: