What does H5N1 mean? 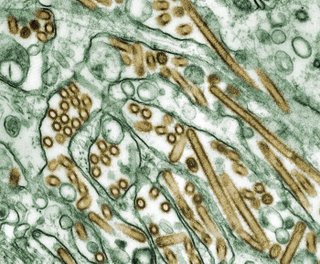 With the alphabet soup of acronyms that are being talked about in reference to the flu (H5N1, CDC, WHO) it can be hard to understand exactly what is going on.

One of the most important acronyms you may have heard is H5N1, which is the name of the bird flu strain that is causing so much concern around the world right now. H5N1 has already caused a flu pandemic in birds and infected about 230 people.

So why is it called H5N1? Every time a new flu virus is identified, it is named for two proteins, hemagglutinin and neuraminidase, that are on the surface of the virus. Hence the H and the N abbreviation.

The numbers that are included in the virus name signal a genetic change in the virus. Some combinations of H and N cause serious illness and death, while others only cause mild symptoms. Flu viruses that begin with H5 or H7 are highly likely to make birds and people sick.

And as for those other acronyms you may hear? CDC stands for the Centers for Disease Control and Prevention, which is the principal federal health agency that works to protect the health and safety of Americans. WHO is the World Health Organization, the health arm of the United Nations. Both organizations are serving as watchdogs for pandemic flu and sharing information as the threat develops.