Smoking and flu: Altogether worse for you 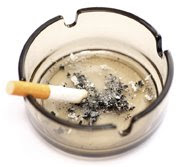 Hack, hack, wheeze...achoo? If you or someone you care about is a smoker, you may have noticed that flu season can be particularly trying on your health. But ever wonder why?

Researchers have long observed that smokers suffer much more from the flu and colds than nonsmokers. Symptoms that are mild in nonsmokers can make smokers very sick and even kill them. As if that wasn't scary enough, kids who breathe secondhand smoke also can become sicker when they have viral infections.

But until recently scientists didn't know why smokers have more exaggerated responses to viral infections. The most common idea was that smoking decreases a body’s ability to fight off the virus. However, it turns out the opposite might be true.

A recent study found that smokers don't get in trouble because they can't fight off the virus; they get in trouble because they overreact to it. Researchers from Yale University found that the immune systems of mice exposed to cigarette smoke (as little as two cigarettes a day for two weeks) overreacted when they were also exposed to a mimic of the flu virus. The immune systems of Mickey and his friends cleared the virus normally, but the overblown inflammation caused tissue damage, accelerated emphysema and airway scarring.

More research needs to be done to see if the same reaction is at work in humans. But until then, it's important to remember that we do know that smoking makes the symptoms of colds and flu worse. Along with all the other ways that smoking makes us sick, this is one more reason to squash that cigarette.

Photo credit: iStockphoto
Posted by Get Ready Team, APHA at 10:47 AM

Smoking is very bad Habit..its not easy to quite. nice blog we are from
Medical Tourism Company