Thanks to public health practices like sanitation, many diseases from centuries-past are rare in the industrialized world. Take cholera, for example. The water- and food-borne intestinal disease, which has caused at least seven pandemics since the 19th century, is not a major threat in the United States.

Unfortunately, cholera still wreaks havoc in some parts of the world. Among the worst off? Zimbabwe. Thousands of Zimbabweans have died in the past year and continue to get sick and die from this horrible epidemic. Why? Poor water and sanitation, as well as a weak health care system, are to blame. Rainy season makes it worse.

Leadership has also been a problem in fighting the epidemic in Zimbabwe. The country's president, Robert Mugabe, initially denied that there was a cholera problem in the country and then declared it contained even as health experts said it was getting worse.

Cholera is easily treatable with antibiotics and rehydration, but sadly, the treatment is often out of reach in many countries. Zimbabwe, where life expectancy is about 40 years, is a country with a broken sewerage system, where soap is hard to come by and where hospitals lack medicines and staff.

While cholera's wrath is largely an ocean away, its toll is a grim reminder of the importance of preparing for and protecting our communities against disease. Even so, we're not immune. Overseas travelers can be at risk and can bring the disease back to the United States.

Want to know more or help? Visit the World Health Organization for the latest update on the cholera epidemic. Several humanitarian agencies such as Doctors Without Borders are working hard to save lives and could use your support.

Posted by Get Ready Team, APHA at 3:36 PM No comments: 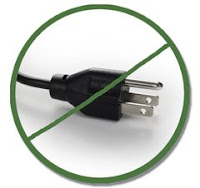 Take a minute to think about your everyday activities. How many of them require electricity? Now imagine your daily life without power. You probably couldn't watch TV or go online. Your fridge would shut down and your stove might not work. In certain types of emergencies, Mother Nature can leave us stranded without electricity for days or even weeks at a time. Before this happens, double-check your emergency kit to make sure you'll be prepared.

There are several ways you can plan ahead for a power outage. Make sure you have a good preparedness kit that includes a can opener and a radio, but be certain they don't require electricity. A residential generator could also prepare you for an emergency. However, if you decide to buy a generator for your home, follow the safety warnings and never, ever use it inside your home.

When the lights go out, it's tempting to start lighting every available candle, but this might lead to a whole different emergency. Candles can be a fire hazard, so it's much safer to use flashlights and battery-powered lanterns. If a power outage occurs during the winter, be smart when trying to stay warm. Put on extra clothing and never use a gas stove for heat.

Perishable food is a concern during a power outage, and could put that expensive cheese you’ve been saving at risk. To protect your food, try to keep the refrigerator and freezer doors closed as much as possible. A refrigerator can keep food safely cold for about four hours if it is unopened, but never take chances with food safety. Follow the U.S. Department of Agriculture's advice: When in doubt, throw it out!

For more tips on what to do during a power outage, check out this Web page from the Centers for Disease Control and Prevention. Then take some time to make sure you are prepared to live without power. Don't be left in the dark!

Posted by Get Ready Team, APHA at 4:24 PM No comments: 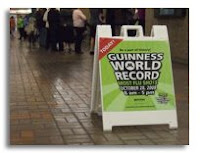 Today's guest blog entry is by Tricia Todd, MPH, assistant director of the Health Careers Center at the University of Minnesota.

Oct. 28, 2008, will go down in history as the day the University of Minnesota shattered the Guinness World Record for most flu shots given in a single day — 11,810. Attempting to break the 2006 record of 3,271 shows just how important the university feels flu shots are to public health and safety.

"We learned a lot about giving out thousands of vaccinations in a very short period of time," said Edward Ehlinger, MD, MSPH, director of the University of Minnesota's Boynton Health Service. "This is important information for other emergency preparedness planning. I would also expect to see a drop in overall influenza cases on campus. The health of students plays a very important role in their academic success."

"It was exciting to participate in this event, and it was neat to think that I contributed to the 11,810 immunizations administered," said Emily Croswell, a senior nursing student. "I felt like we worked well as a team, set a goal, and successfully achieved our target. I was proud to be a part of this experience, and I will carry this memory for a lifetime."

Judy Beniak RN, MPH, director of the Health Careers Center and faculty coordinator of a university immunization class, noted that the Guinness World Record flu clinic showed "how pre-licensed students with the proper training in mass immunization can work together to provide outstanding public health service. I'm proud of all my students."

It is with great excitement that APHA announces that we are expanding our Get Ready campaign from a focus on pandemic flu and emerging infectious diseases to one that is centered on emergency preparedness for all hazards.

Since 2006, APHA’s Get Ready campaign has been educating the public on emergency preparedness in the event of a pandemic or disease outbreak. We’ve successfully used our blog, Twitter, podcasts, fact sheets, Web site and kids materials to spread this message. We’ve launched an annual Get Ready Day as well as a program to remind people to restock their emergency supplies when they change their clocks for daylight saving time.

While we will continue these efforts, we will also now be working to educate the public about preparedness during natural disasters, environmental accidents and bioterrorism and other terrorist attacks. Every disaster has unique characteristics, yet the same preparedness techniques can be used in a variety of different situations. At the same time, there are important differences to consider when deciding how to respond to an emergency: whether to shelter in place or evacuate quickly, whether to seek treatment immediately or to quarantine at home.

Our expanded focus on all hazards preparedness will help people make safe, appropriate decisions in crisis situations. We hope you’ll join us as we move forward.

Listen to our podcast interview with Dr. Benjamin as he discusses the Get Ready campaign expansion.

Posted by Get Ready Team, APHA at 4:13 PM No comments: