National Infant Immunization Week is set for April 26-May 3. The week is a time to celebrate the successes and benefits of immunization and to make sure all kids are fully vaccinated.

﻿Unfortunately, infectious diseases that could be prevented by vaccination remain a threat in the U.S. Right now, New Jersey, Ohio and New York are struggling with mumps outbreaks, and California is tackling cases of measles.

Fully immunizing kids by age 2 is important, because children’s immune systems are at their weakest when they are young. When infants are vaccinated, it gives them a healthy start to life. It also helps prevent diseases from spreading, which is a big step in emergency preparedness for families and communities.

Each year, routine vaccinations can prevent up to 14 million cases of disease. They can also save 33,000 lives and billions of dollars.

If you have or are expecting a little one in your family, be sure to learn about the recommended vaccination schedules and talk about them with your health provider.

For more information from APHA’s Get Ready campaign on how vaccines help protect us from disease, download our fact sheets on child and teen vaccinations.
Posted by Get Ready Team, APHA at 11:29 AM No comments: 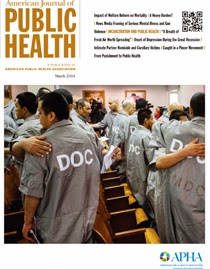 Disasters can happen to anyone, anytime. But some people are more in danger of being harmed by disasters. According to a recent study, our older family and friends may be the most at risk.
The study, published in APHA’s American Journal of Public Health, finds that more than two-thirds of older Americans don’t have an emergency plan for natural disasters. It also finds that more than one-third do not have a basic supply of food, water and medical supplies stored for an emergency.
APHA’s news blog, Public Health Newswire, spoke with researcher Tala Al-rousan recently about the study. Al-rousan says that older adults are more likely to live alone, which can be dangerous during disasters. Disasters can make it hard for seniors to reach working phones, electricity, transportation or friends or family that can help them.
“Some use mobility devices that need electricity,” Al-rousan says. “Others cannot hear warning sirens. Older adults are more prone to suffer the consequences of extreme temperatures or noisy crowded shelters. Their chronic conditions are worsened by these weather changes more than younger people.”
So what can we do for older adults around us that might need more help? The community is a great place to start.
“Trained local leaders, health coaches, “block captains” and other residents from the community who are able to identify, reach older adults and help them prepare and respond to emergencies are examples that proved valuable,” Al-rousan says.
The American Red Cross encourages seniors to take steps to ensure their own safety, recommending that they develop a personal support network. According to the organization, seniors should:
Check out this fact sheet from APHA’s Get Ready campaign for preparedness tips for older adults and their caregivers for more information.
Posted by Get Ready Team, APHA at 11:46 AM No comments:

Today’s guest blog from the Pan American Health Organization is in recognition of World Health Day which was celebrated on April 7. This year’s event focused on preventing vector-borne diseases such as malaria, dengue and Lyme disease. More than half the world’s population is at risk from such diseases, which are carried by mosquitoes, flies, ticks, water snails and other vectors.

Vector-borne diseases: Small bite, big threat
Insects like mosquitoes and ticks might have small bites, but their bites are a big threat. Some insects are known as vectors because they carry parasites — bacteria, protozoa, worms and viruses — inside them. With one bite, these vectors can transfer the parasites into the human body and the parasites can cause serious diseases.

The Aedes aegypti mosquito is capable of transmitting both chikungunya and dengue virus. It bites most actively two hours before and after dawn and dusk. It is present in almost the entire American continent, including Florida, Texas and Puerto Rico.

Chagas disease is caused by a blood-sucking “kissing bug” and can lead to problems in the heart and intestine. In the United States, chagas disease is considered one of the neglected parasitic infections, a group of five parasitic diseases that have been targeted by the Centers for Disease Control and Prevention for public health action. The Anopheles mosquito can transmit malaria.

These diseases affect millions of people in different countries and pose a big threat to people. Other vector-borne diseases like lymphatic filariasis and leishmaniasis can cause swelling in the legs or serious deformities, respectively. Most importantly, if the person does not seek medical treatment, all of these diseases can make you sick and lead to death.

Around the world, these vector-borne diseases are making millions of people sick, especially people who live in poverty. These vectors can spread in large cities and rural areas, where there are poorly constructed houses, lack of hygiene and sanitation, and lots of people migrating for work. Global climate change, by causing more rainfall and warm weather, has also expanded the places where these insects can grow and spread diseases.

There is no vaccine for most of these vector-borne diseases, and while there is treatment for some of them, prevention is the key. Integrated vector control can decrease the risk of disease transmission. This approach, used by national and local governments, includes implementing rational insecticide usage, surveillance and actions like improving access to safe water, regular waste collection services, basic sanitation, education, hygiene and adequate housing quality.

You also can play an essential role in infection prevention. You can wear clothing that acts as a barrier to bites, use mosquito nets and proper insect repellants and cover or eliminate containers where water collects where some of these vectors breed.
Posted by Get Ready Team, APHA at 4:58 PM No comments:

Don’t panic — Get ready instead! 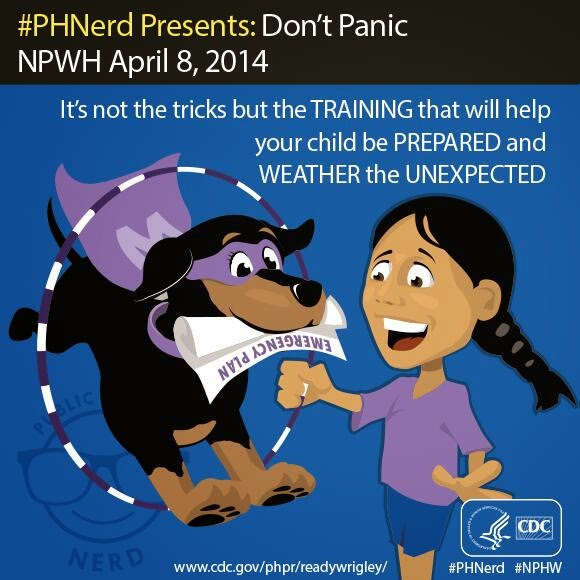 It’s National Public Health Week, an annual celebration led by APHA. Today’s focus of “Don’t Panic” is a perfect opportunity to share information about preparedness in your community.

Disasters can strike at any time, but they don’t necessarily have to be devastating. Having supplies and knowing where to evacuate ahead of time can make a big difference. APHA’s Get Ready campaign has many resources to help people become more prepared, including fact sheets, videos, podcasts, e-cards and recipes.

In celebration of NPHW, we ask you to take steps toward getting ready for disasters. Make sure your family has a disaster plan, help a friend create an emergency kit and spread the word about emergency preparedness. Post a link to our resources on your Facebook page, or print out one of our fact sheets and post it on a bulletin board.

Take a look at the NPHW website to learn more about what’s going on the rest of the week!

National Public Health Week is only days away: Help raise awareness of preparedness on April 8

Each year, National Public Health Week is celebrated in April to promote public health. This year, the APHA-led event will be celebrated from April 7-13. Tuesday, April 8, is raising awareness of being prepared for disasters with a focus on “Don’t Panic.”
Disaster preparedness starts with community commitment and action — and that’s where you come in. NPHW offers a great opportunity for you to share information and hold events around preparedness. Check out some of the great activities that are planned around the nation already:
What will you be doing to raise awareness of preparedness? Leave a message in the comments on the Get Ready Blog, and submit your event to the NPHW calendar.

And after your event is over, send pictures to The Nation’s Health newspaper to be included in the NPHW round-up in the July issue.
Posted by Get Ready Team, APHA at 2:33 PM No comments: