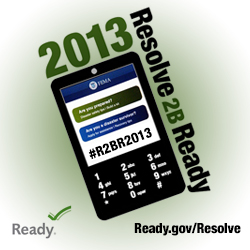 Are you fully prepared for a disaster? There is always something more to do to make sure that you and your loved ones are ready in case an emergency happens. That’s why we’re suggesting a New Year’s resolution: Resolve to be ready in 2013!

The “resolve to be ready” reminder comes from the Federal Emergency Management Agency’s Ready campaign, and this year the agency is focusing on getting people to include technology in their preparedness plans. For example, almost 55 percent of Americans now own smartphones, so FEMA wants to help people “turn the technology in their purses and pockets into a life-saving tool during and after an emergency or disaster.”

Among FEMA’s technology preparedness tips:
Get Ready can help you learn how to use technology to be prepared in the New Year, too. Check out our recent podcast about learning to be tech-ready.

Here’s to a healthy, happy and safe New Year!

What are your preparedness resolutions this year? Tell us in the comments!

New report asks: Are we ready or not?

It can be hard to measure how ready we are for emergencies. A new report from Trust for America’s Health and the Robert Wood Johnson Foundation tries to answer that question. The report, “Ready or Not? Protecting the Public from Diseases, Disasters and Bioterrorism” comes out every year and can tell us how prepared we are, state-by-state and as a country.

The report finds that as a country, we have made some progress in getting prepared since 2001 by improving the availability of vaccines and bettering disease monitoring, among other measures. However, budget cuts at the national and state level have stopped the U.S. from making even more progress.

The report ranked states from most to least prepared on a scale of one to 10, with 10 the most prepared. Overall, 35 states and Washington, D.C., scored a six or lower. No states scored 10 out of 10, but five states were ranked as the most prepared, at eight out of 10: Maryland, Mississippi, North Carolina, Vermont and Wisconsin. Kansas and Montana were the least prepared, the report found, scoring a three out of 10. Check out this map to see where your state falls.


Read the report to learn more about why your state was ranked high or low.

How did your state do? What do you think of the report? Let us know in the comments below!
Posted by Get Ready Team, APHA at 3:18 PM No comments:

Get Winter Ready with us this year!

Today is the first day of winter, so what better time to start thinking about what you need to do to prepare for winter weather?

We’ve put together a Winter Ready page so that you can see all of our great resources on winter storms, power outages, cold and flu season and more — all in one place.

We’ll also be focusing on winter weather preparedness over the next few months, so check back for our Winter Ready blog posts. You can subscribe to the Get Ready Blog so you don’t miss a thing.

Stay warm, stay safe — and happy winter!
Posted by Get Ready Team, APHA at 11:25 AM No comments:

Are you tech ready? Check out our new podcast on digital disaster preparedness!

The Get Ready campaign recently spoke with Amy Donahue, a reference librarian at the Medical College of Wisconsin, about preparing for a disaster digitally.

In our new podcast episode, Donahue gives tips for using technology to help us before, during and after an emergency. She has suggestions for how to make sure technology will work for us when we need it most — things like having extra batteries and having a plan for charging your phone when the power goes out.

Donahue also explains how librarians can help when disaster strikes.

“We can help people identify good resources for disaster information. We can help them find new sources if they don’t know where to start. And then we can also help work with community partners,” to help people share information before, during and after an emergency, she says.

In addition to preparing your tech gear, Donahue reminds us that “nothing beats having the kit, having the plan, making sure all your technology will help you and not hinder you before an emergency ever strikes.”

You can listen to the newest Get Ready podcast and read the transcript here, or subscribe to our podcasts on iTunes!

Is there a specific topic you think we should cover in our next podcast? Let us know in the comments!
Posted by Get Ready Team, APHA at 10:52 AM No comments:

Give the gift of preparedness this year

Have someone on your holiday gift list who is hard to shop for? Why not give the gift of emergency preparedness? Here are some simple, inexpensive ways to show you care and help your loved ones be more prepared in the new year:

That’s our short list of preparedness gift ideas. Are you helping someone get ready this year with a holiday gift? What’s on your wish list? What was the best preparedness gift you have ever received?  Let us know in the comments!  Have a happy and safe holiday season.

APHA announces winners of its Flu Near You Challenge

Over the past year, the Get Ready campaign has promoted APHA’s Flu Near You Challenge, a contest that asked Association members to recruit users into the Flu Near You tool. More than 900 APHA members and 100 affiliated state and regional public health associations pitched in to help spread the word about Flu Near You, helping to recruit thousands of people into the system.

Even though APHA’s Flu Near You Challenge is over, Flu Near You is still going strong! Thanks to everyone who participated in Flu Near You over the past year, organizers have made many improvements, including creating a Spanish version of the survey and launching a smartphone app.

If you’re not already using Flu Near You, now is a great time to sign up. It’s free, and it’s a great way to find out if flu is headed your way. Sign up today so you can keep track of the flu this winter!
Posted by Get Ready Team, APHA at 11:08 AM No comments:

Email ThisBlogThis!Share to TwitterShare to FacebookShare to Pinterest
Labels: APHA, flu, flu near you, flu near you challenge, flu season

Earliest start to the flu season in nearly a decade — It’s not too late to vaccinate!

This week, officials at the U.S. Centers for Disease Control and Prevention announced that they are seeing increased flu activity around the country. Thomas Frieden, CDC director, said that this was “the earliest regular flu season in nearly a decade.” He also warned that “this could be a bad flu year.”

CDC made the announcement during a teleconference to kick off National Influenza Vaccination Week, which runs from Dec. 2-8. The observance was started in 2005 to remind people that it’s not too late to vaccinate if they haven’t gotten their flu shot before the holidays.

Frieden also had some good news: This year’s flu shot, which protects against different types of flu strains than last year’s shot, is almost a perfect match for the types of flu that doctors and hospitals are finding in the U.S. This means that people who have already had their flu shot this year will be well-protected.

The CDC recommends that almost everyone 6 months of age and older gets a flu shot every year. It’s especially important for people at high risk for complications from influenza — like pregnant women, young children, older adults and people with chronic diseases — to prevent getting the flu with a seasonal flu shot. (Find out more about high risk groups on CDC’s website.)

It takes about two weeks for the flu shot to fully take effect, so right now is a great time to get the flu vaccine. As Frieden reminded us this week, “When you get together with your friends and family, be sure you spread good cheer and give presents, and that you don't share infections and spread the flu.”

Here’s to healthy, happy holidays for all!

Posted by Get Ready Team, APHA at 9:05 AM No comments: