Plague: It’s not just in the history books 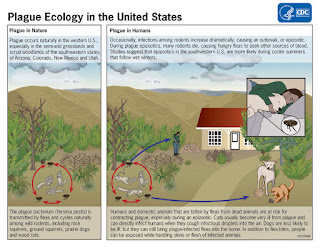 Are you at risk for plague? Just hearing that question may make you do a double-take: Isn’t plague the disease that killed a lot of people that we learned about in school? Sadly, plague isn’t in the past with those awkward school memories. But just like bowl haircuts, it doesn’t have to be in your future.

Plague is an infectious disease caused by a bacteria, Yersinia pestis. It’s transmitted by fleas and occurs among animals and humans, including their pets. It usually affects seven people each year in the U.S., according to the Centers for Disease Control and Prevention. Worldwide, as many as 2,000 cases are reported annually.

The bubonic plague is the most common form and most commonly comes from the bite of an infected flea. You can also get plague from infected animals or from inhaling droplets from someone who has the disease.

Most Americans who get plague are in western states. People who live in Colorado, north-central New Mexico and southwestern and northeastern California are especially at risk, according to a recent study.

The main symptoms to look for with plague are swollen, painful bumps in your armpit, neck or inner thigh. Other warning signs are getting really hot or cold, headaches, feeling exhausted or having a bad cough. It usually takes one to six days after being infected for symptoms to start.

It’s easy to ignore symptoms and just hope they will go away, like some of us do with overeating on Thanksgiving, but ignoring the plague will lead to much worse problems than a food baby. If you think you have plague, CDC recommends that you see a doctor, who can give you antibiotics to treat the disease. While plague-related death rates are nowhere near what they were in historical times, people do still die from the disease.

So, how do you prevent plague? Just in case you haven’t had your coffee or been rattled awake by your commute today, here are three easy-to-remember tips from CDC:


You can also let your local health department know about sick or dead animals in the area and not let your animals sleep in your bed.

Knowing this, we can hopefully keep plague outbreaks in the past.

Posted by Unknown at 7:00 AM No comments:

Thanksgiving food tips from USDA: When it comes to the bird, safety’s the word

Today’s guest blog on turkey safety is by the U.S. Department of Agriculture’s Food Safety and Inspection Service.

Whether you’re a Thanksgiving cooking pro or newbie, preparing one of the largest meals of the year can be stressful. To avoid making mistakes that could cause foodborne illness, the U.S. Department of Agriculture’s Food Safety and Inspection Service wants you to be aware of these common Thanksgiving myths:

If you have any Thanksgiving myths you want to check out, call the USDA Meat and Poultry Hotline at 1-888-MPHotline — 1-888-674-6854 — where you can talk to a food safety specialist in English or Spanish between the hours of 10 a.m. and 4 p.m. EST, or chat live at AskKaren.gov. The Meat and Poultry Hotline will even be open on Thanksgiving Day from 8 a.m. to 2 p.m. EST to take last-minute calls.

Posted by Unknown at 8:00 AM No comments:

Happy birthday to us! APHA’s Get Ready Campaign turns 10 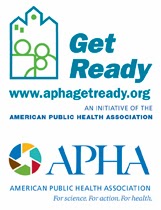 This year is the anniversary of APHA’s Get Ready campaign and we’re celebrating 10 years of helping Americans become more prepared for disasters. Hooray!

When we launched in 2006, our goal was to make it easy for Americans to find, understand and share preparedness information and to help them become more prepared. Since then, the nation has faced storms — from Hurricane Sandy to Hurricane Matthew —earthquakes, disease outbreaks and numerous other disasters. And the Get Ready campaign has been there to help people prepare for them.

From fact sheets and Q&As to photo calendars and even a song contest, the Get Ready campaign has shared a ton of educational tools that have helped people ready themselves, their families and their communities for emergencies. Check out some of the fantastic resources we’ve shared:


And we haven’t even mentioned our videos, infographics, cookbook, tools for kids, quizzes, hand-washing materials, coloring book and preparedness events, like Get Ready Day. There’s so much great information it’s hard to mention it all!

Swing by the Get Ready website today to see all the wonderful tools we’ve created for you. Then share them on your campus or in your community.

Thanks for celebrating 10 years of becoming more prepared with us!

Posted by Unknown at 3:28 PM No comments:

Note: This post was republished from APHA's Annual Meeting Blog

When Hurricane Joaquin hovered over South Carolina in the fall of 2015 causing historic flooding, state residents — particularly in the Midlands region — had to quickly discover what they were made of.

In the midst of disaster, researchers from the University of South Carolina Arnold School of Public Health saw an opportunity to see how residents acted and adapted to a life-changing event. They presented on their work during Monday’s Annual Meeting session “Response, Recovery and Resiliency: Understanding Public Health in Practice During and After the Flood of October 2015.”

Over 11 trillion gallons of water were dumped into the Midlands region of the state, said Heather Brandt, associate professor of health promotion, education and behavior at the Arnold School of Public Health.

“This is not something that’s becoming a 1,000-year flood,” Brandt said. “It’s becoming something far more routine and certainly climate change is playing a role in this.”

Social media played a large role in communicating the threat of floods, particularly from residents and media outlets, Brandt said. She and researchers examined tweets with the hashtag #SCFlood over four time periods, including 72 hours before Sept. 30 to Oct. 2, when residents were urged to leave areas at risk for flooding as well as the six months following the flooding from Oct. 15 through April 15. The most popular themes in tweets across all periods were about the natural environment, built environment and devastation.

Those connected on social media could glean information from Twitter about accessing FEMA assistance, resource donation, road closures and shelter availability. Access to this information contributed to the resiliency of affected residents.

“I had never seen so much bottled water in my life,” Brandt said. “We saw a lot of community resiliency coming forward and demonstrating support. People relying on each other, people visiting to play games with kids at the shelters, having shelters where people could bring family pets, not just dogs and cats.”

Communication was critical for response and recovery and crucial to residents building resiliency during and after the crisis, said Sayward Harrison, who studied community resilience during the flooding for the University of South Carolina’s SmartState Center for Healthcare Quality.

Harrison defined community resiliency as the “capability of a community to draw upon its individual, collective and institutional resources and competencies to cope with, adapt to and develop from the demands, challenges and changes encountered before, during and after disaster.”

In interviews of nearly 40 residents affected by the floods, Harrison brought up examples of that definition in action. Those included identifying a Spanish-speaking TV reporter in the Midlands region who could translate emergency messages to Hispanic residents, such as boil water advisories and stories of residents in affected neighborhoods who knew where vulnerable residents, such as seniors, lived so resources could be directed to them.

Another part of resiliency is post-traumatic growth — the change that comes as a result of trauma that involves developing a “new normal,” Harrison said.

“We’re thinking of ways we can build a stronger community,” Harrison told attendees. “People are used to the way things were but it’s good to have change.”
Posted by Unknown at 10:41 AM No comments: