Why men should be prepared for disasters: Q&A with Integris Health’s Steve Petty

June is Men’s Health Month, a great time to remind American men and boys that they need to be prepared for emergencies. Steve Petty is director of community health improvement for Integris Health, Oklahoma’s largest hospital network, and administrative director of the network’s Men’s Health University, a health screening event for men. Check out what Petty, who is a member of APHA’s Men’s Health Caucus and the Men’s Health Network, recommends.

APHA recently partnered with March of Dimes to promote preparedness for pregnant mothers and families with infants. How can emergency readiness specifically improve men’s health?

Personal consideration and preparation for emergencies leads to a more confident and content state of mind. Having a plan for the critical actions during an emergency improves the chance that such individuals will escape harm. The entire family unit benefits from men who engage in emergency readiness planning.

You’ve spoken of the “silent health crisis” facing American men, who live on average five years fewer than women. One reason is because men take more risks. Does this put men at greater risk during public health disasters?

It is thought that the increase in such risk taking behavior might be decreased if men were encouraged to participate in debriefing or defusing activities.

The life expectancy gap between men and women is, in many cases, due to our different biological makeup, but it is also the socialization and lifestyles which highly influence health outcomes. As young boys, many are taught that big boys don’t cry, leading to the "macho man” attitude where men are expected to ignore health concerns and push through the pain.

Also, studies that have been performed to date show some variations in mortality rates during disasters. Men are more likely to suffer severe consequences psychologically, like suicide, following a disaster.

They are less likely for the most part to seek care for emotional problems and often remain symptomatic for longer periods of time when compared to women. A few studies demonstrate that one response to stress — particularly following large-scale disasters — is that men increase the frequency of risk-taking behaviors.

Fill in the blanks for APHA’s Get Ready Blog readers and your Oklahoma City communities: “I pledge to help men prepare for emergencies by ________”

I have so many recommendations here, including:

It's also important for men — and women, for that matter — to have regular checkups, so that screening tests can detect health problems early, when they are easier to treat.

June is a great opportunity to set an appointment with your health care provider, or you can stop by one of the many health stations now found in retail settings. A great place to find the information you may need before and after that visit is the online Men's Health Online Resource Center.

School and community safety takes all of us, including students

June is National Safety Month, an observance sponsored by the National Safety Council. This year’s theme, “Safety: It Takes All of Us,” is a reminder that anyone can contribute to their community’s safety, especially when it comes to being prepared for emergencies.

For our latest podcast, APHA’s Get Ready campaign spoke to Alex Pasculle, a member of the Federal Emergency Management Agency’s National Youth Preparedness Council, about how teens can be a part of their community’s emergency preparedness and awareness.

Formed in 2012 to bring together youth leaders from across the country who are passionate about making a difference in their communities, FEMA’s National Youth Preparedness Council gives students an opportunity to plan and carry out a community project during their term, as well as sharing their perspective on FEMA initiatives and projects. This April, Pasculle worked to put together an emergency and community preparedness fair in Pittsburgh, Pennsylvania.

Pasculle has a long history of involvement in emergency preparedness, volunteering as a firefighter, life support instructor and emergency medical technician. He also helped organize a fundraiser to raise money for 2012 tsunami victims in Japan. He was lauded this year for the role he played in assisting students at his high school following a stabbing attack.

Pasculle encouraged other students to get involved in disaster and emergency preparedness.

“(They can) speak to their schools or teachers or parish or even youth ministers and tell them that they're interested…Or they can reach out to local fire departments and stations,” Pasculle told the Get Ready campaign.

Part of youth leadership and engaging the public in emergency preparedness is sharing messages through social media, Pasculle says, particularly via tools that appeal to younger audiences. Pasculle suggests using social media and the Internet to reach family and loved ones during an emergency if regular means of communications aren’t available.

For more information about how youth can get involved in emergency preparedness, listen to the podcast.
Posted by Get Ready Team, APHA at 10:21 AM No comments:

Take steps to be prepared for disasters during National Safety Month

Whether it’s a heat wave, flood, tornado or a power outage, preparing ahead of time is key. Learn about the disasters that are likely to occur in your community and what you need to do to get ready. Share this information with your family and friends to ensure they are prepared as well.

There are many great resources available to help you get prepared, including the American Red Cross, Ready.gov, and APHA’s Get Ready campaign.

For tips on getting ready for some of the most common disasters, check our Get Ready fact sheets:
Educate yourself this June, and remember, you can’t be safe without being prepared!

Thanks to everyone who entered APHA’s Get Ready Tips from Tots Photo Contest!

More than 100 photos were received of adorable babies and tots. Our judges are now reviewing the entries, looking for those that best  fit the preparedness theme. The contest, announced this spring, is using babies as a way to share preparedness information. (Because who can resist a precious talking baby?) The winning photos will be shared online and in a 2015 Get Ready calendar. 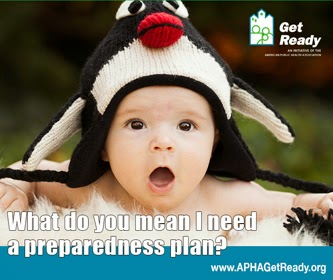 We’ll announce the winners in September, so stay tuned for tons of baby cuteness.

The Tips from Tots contest comes on the heels of the Get Ready campaign’s successful 2013 and 2014 photo contests, which used cats and dogs to share preparedness advice. The 2014 dog calendar can be downloaded now for free via the Get Ready website.

One note: If you downloaded the dog calendar before March 2014, you should know that we had an oopsie. Unfortunately, in our excitement to get the calendar published in the fall there were a few mistakes on the dates. But don't blame our doggies! This accident was all our fault. The June, July and December dates in the dog calendar have been corrected. If you want a corrected copy, you can download the whole calendar again, or just the dates for those three months.
Posted by Get Ready Team, APHA at 2:18 PM 1 comment:

Help Dad be prepared for emergencies with our new e-card

June 15 is Father’s Day, and APHA’s Get Ready campaign can’t think of a better way to show love and appreciation for the dads in our lives than to share the gift of emergency preparedness.

Instead of the usual collection of presents Dad expects this time of year, how about surprising him with a fully stocked emergency preparedness kit? Your entire family will thank you later!

Check out our fact sheets for tips on putting together an emergency stockpile and view our collection of Get Ready e-cards for more fun ways to remind your friends and family to prepare for emergencies.

Summer is finally here, which means it’s time to dust off the grill and break out the sunscreen. As school ends and families prepare for fun summer adventures, we want to make sure that you’re safe and healthy. APHA’s Get Ready campaign is once again hosting its Summer Safe blog series so you can have simple safety tips all summer long.
Stay tuned for blog posts on:
Check out the Summer Safe page on the Get Ready website for free fact sheets that you can print and share with your family or in your community.

If you have any questions or suggestions about summer safety, let us know in the comments, or send us a tweet @GetReady.
Posted by Get Ready Team, APHA at 5:03 PM No comments:

Surviving the stress of a disaster

﻿ Today’s guest blog on the importance of preparing both mentally and physically for disasters is by Laura Santacrose, MPH, the 2013-2014 student fellow for APHA’s Maternal and Child Health Section.

While reactions to disaster will vary from person to person, it is common to experience feelings of shock and disbelief, and to experience difficulty sleeping and concentrating. People can even experience feelings of helplessness. Some people may experience changes in eating habits and use of alcohol, tobacco or other drugs. People often find it helpful to talk about their experience with friends and family, write their thoughts and feelings in a journal, or seek professional help and support. These are all healthy coping strategies that can help people deal with stressful situations like disasters.

Disasters can be particularly stressful for pregnant women and caregivers to children. The emotional and mental stress of experiencing a disaster can have a physical effect on a pregnant mother’s body, which can lead to poor nutrition and preterm complications. The stress of a disaster may increase the risk of preterm labor, low birth weight and even miscarriage. Therefore, it is important that all pregnant women know the signs and symptoms of preterm labor. Learn more about the signs of preterm labor from the Get Ready campaign and the March of Dimes.

Additionally, infants are completely dependent on their caregivers to protect them during a disaster. Therefore, caregivers need to care for their own physical and mental health in order to care for their infant effectively. An added benefit of breastfeeding your child is that by keeping baby close to the mother, it creates a soothing effect for both mom and baby, which can help to relieve some of the emotional stress felt after a disaster.

Check out the Get Ready campaign’s Mental Health and Disasters fact sheet for more information about how to prepare for the emotional toll a disaster may have on you or your loved ones.