What is an Emerging Infectious Disease?


When an infectious disease emerges, how do public health laboratory scientists respond to contain the threat?

Enjoy this great video from the Association of Public Health Laboratories (APHL):


What is an Emerging Infectious Disease? from APHL on Vimeo.
Posted by Unknown at 10:15 AM No comments:

Staying fit can boost both health and preparedness

The benefits of physical activity in everyday life are well known. But physical fitness can also play a big difference in how resilient you are when faced with a disaster.

Consider what happens after a large storm, for example. Your ability to move around can be hindered by fallen trees, snow or standing water. That means slippery conditions, trip hazards and major detours.

At some point, you’ll have to start cleaning up all of that storm-related mess. Trees and debris are heavy, and there will probably be a lot of it. Heat, cold, dust or mold can make what would normally be easy a herculean task. And on top of all that, you’ll have the stress and mental exhaustion that comes with coping with a disaster.

With that in mind, it’s a good idea to start thinking about how physically prepared you are for a disaster. Can you walk long distances or stand for an extended amount of time? Are you able to fill sand bags or shovel snow? What if you had to carry large items or children?

Like any other preparedness activity, the time to start is now. Begin by assessing your current physical fitness. Talk to a doctor and be honest about your starting point. Then choose an activity that you’ll want to continue.

You can even turn your physical fitness activity into a preparedness one. For example, you can:
No matter how you choose to physically prepare, you’ll see benefits in both your overall health and your ability to cope with disasters.

If you’re looking for a fun way to boost your fitness, APHA’s 1 Billion Steps Challenge is happening now through May 31. As you work to become healthier, you can also make a difference toward making the U.S. the healthiest nation. We’re even offering prizes! Sign up now.

Support your community’s preparedness: Donate to the Stamp Out Hunger Food Drive May 14 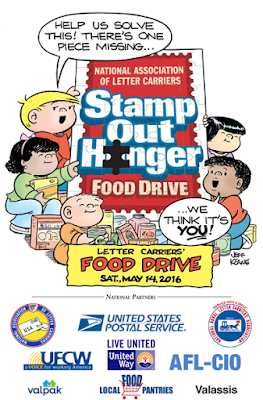 Did you know that food banks serve an important role in community preparedness? It’s true! Food banks help community residents who need assistance year-round. But after a disaster, they’re called on to play a greater role.

When people are displaced from their homes and cut off from their jobs after disasters such as tornadoes, floods or hurricanes, there’s a greater demand on food banks. In 2005, after New Orleans was hit by Hurricane Katrina, the city’s Second Harvest Food Bank became the largest food bank in the world’s history. During the next two years, Second Harvest gave out more than 75 million pounds of food.

Like Hurricane Katrina, most disasters happen without warning. That means it’s up to all of us to make sure our food banks are ready, all the time. That’s where you — and your local post office — come in.

When your postal carrier drops by this Saturday, she or he will be ready to pick up more than just mail. Saturday, May 14, is the national Stamp Out Hunger food drive, during which postal carriers pick up food donations that are set out next to U.S. mailboxes.

Now in its 24th year, the Stamp Out Hunger food drive collected 71 million pounds of food in 2015. The event is organized by the National Association of Letter Carriers with support from the U.S. Postal Service, United Way and other sponsors.

To take part, just leave a sturdy bag containing non-perishable, non-expired foods, such as canned vegetables, pasta, rice or cereal, next to your mailbox before your mail comes on Saturday. Carriers will bring the food to local food banks, pantries or shelters. If you’re not sure whether your postal carrier will be taking part in the food drive Saturday, contact your local post office.

Also, for the first time, the food drive is collecting online donations, which will be used to support food banks in San Francisco and New York City.

If you can’t take part in Saturday’s food drive, you can hold your own event at another time of the year. APHA’s Get Ready campaign has a free how-to toolkit for making your community food drive a success.

Posted by Unknown at 1:58 PM No comments: