Cast your vote, get your flu shot on Nov. 4

Any idea on what day — and in which place — 126 million Americans are planning to show up right near the beginning of flu season? Hint: It's been in the news a lot lately.

That's right. On Nov. 4, millions of Americans will be heading to their neighborhood polling places — which is exactly where some of us will be able to receive our seasonal flu shots.

Through Vote & Vax, a joint initiative of the Robert Wood Johnson Foundation and the nonprofit Sickness Prevention Achieved through Regional Collaboration, you could have the chance to receive your flu shot at your neighborhood polling place on Election Day 2008.

With the help of major health partners, including the American Public Health Association, planners hope that there will be more than 1,000 Vote & Vax clinics across the nation at the polls. With flu season now under way, the clinics are being held just in time. Each year, about 36,000 people die and more than 200,000 people are hospitalized because of seasonal flu.

The Centers for Disease Control and Prevention is calling on health officials to find new ways for getting vaccines into the arms of at-risk Americans, and this is a great strategy for doing just that. Of course Vote & Vax is not just for voters — it's for anyone who can benefit from a flu shot.

So if you haven't received your flu shot yet, Election Day is your chance. Check the Vote & Vax Web site to see if a clinic is scheduled in your area.
Posted by Get Ready Team, APHA at 10:35 AM No comments:

Q. In the movies, people are always quarantined where there is an outbreak of a contagious disease. If there is a flu pandemic or disease outbreak, will communities be quarantined?

A. A modern-day quarantine would likely look very different than the Hollywood images of scientists in spacesuits and the military forcibly keeping people in their communities. If pandemic flu strikes, public health officials have a more realistic plan in mind.

Let's start with some definitions: "Quarantine" is when people who are not sick but have likely been exposed to a virus are separated from others. These people may be urged to not leave their homes or towns. A related term is "isolation." This is when a person who is already sick is separated from other people to reduce the chances that she or he will get others sick.

Because pandemic flu spreads quickly and you can catch it from others who are sick but don’t show any symptoms yet, quarantine and isolation will probably only play a small role in how communities respond to a disease outbreak. Also, scientists expect restrictive measures to be voluntary, like when a parent is asked to keep a child with chickenpox home from school.

During a flu pandemic, people will be encouraged to stay home from work or school to reduce their chances of getting sick. Schools will be closed and community events cancelled. Sick people will be separated from those who are not — both in health facilities and at home.

Check out this site to learn what items you should include in your preparedness kit in case you ever need to stay home from work or school because of a flu pandemic or anything else that comes your way.
Posted by Get Ready Team, APHA at 10:07 AM No comments:

When's the last time you've checked your stash of spare batteries? How about your first aid kit?

APHA's Get Ready: Set Your Clocks, Check Your Stocks campaign is calling on people to refresh their emergency supplies long before a disaster happens — and to use the upcoming clock change as a handy-dandy reminder. When it's time to change your clocks back on Nov. 2, remember to check your preparedness kit to make sure your emergency stockpile isn't missing any items and that the food hasn't expired.

Haven't created a stockpile yet? Now is the perfect time! Every American should have at least a three-day supply of food and water in case of an emergency, including one gallon of water per person per day, according to preparedness advocates. Other supplies that should be on hand include a first aid kit, medicines, a can opener, flashlight, battery-operated radio and batteries.

To help people create and update their emergency stockpiles, the Get Ready: Set Your Clocks, Check Your Stocks campaign offers free materials on its Web page, online at www.getreadyforflu.org/clocksstocks. Materials include a list of what should be in an emergency stockpile, information on rotating stored food and water and games for kids. For the first time, bilingual materials are available as well, with both a stockpiling information fact sheet and a supply checklist in Spanish.

Check out our materials, then scoot over to your closet or under the bed and look over your supplies. Chances are they are in need of updating. Checking your supplies twice a year with the clock change is a great way to make sure that your emergency supplies are there when you and your family need them. And thanks to APHA, you won't forget.
Posted by Get Ready Team, APHA at 10:03 AM 1 comment:

Hantavirus in rodents a growing threat to human health

Climate change continues to change the way we live, this time being linked to human health and the spread of hantavirus, a disease linked to mice and other rodents.

Cases of hemorrhagic fever with renal syndrome, an illness caused by hantaviruses, have increased in humans in typically cold places such as Russia and Eastern Europe. A probable cause is rodents infected with hantaviruses that are better able to survive milder winter conditions. By some estimates, one in three rodents carries the viruses.

There are five types of hantavirus, and it can be contracted through human contact with infected rodents or their urine and droppings. Infection occurs when humans inhale particles of dried materials or urine. Early symptoms include fever, chills, muscle pain and coughing. The infection can be fatal.

In 2007, cases of hantavirus infections in Russia topped 3,000 by mid-spring, following a mild winter. The increase was attributed to a rodent population that was 10 times higher than in previous years.

The virus has also been found in 10 states in the United States since its identification in 1993. An outbreak in Southwestern states that year affected 48 people with a mortality rate of 80 percent.

Wet, mild winters are thought to contribute to the disease spread, turning environmental issues into public health threats. Rodents are better able to survive, natural food supplies are more abundant and consequently the population is growing.

Humans at greatest risk are those involved in agricultural production, grain or feedlot operations, field biology or other places where rodent contact is likely. One study also found that 70 percent of those infected were exposed while cleaning homes or buildings where rodents had been living. Controlling for rodents in and around the home is the best strategy for preventing infection.
Posted by Get Ready Team, APHA at 4:39 PM 3 comments: 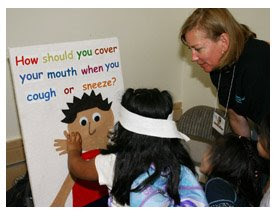 From a school carnival to a city hall news conference, the second annual observance of Get Ready Day was a popular event last month.

Sponsored by APHA, Get Ready Day encourages all Americans to prepare themselves, their families and their communities for all public health threats, including disasters and pandemic flu. This year's Get Ready Day fell on Sept. 16, and health departments nationwide took advantage of the opportunity to promote preparedness to their residents.

Among the highlights, APHA organized a "fun fest" at a Washington, D.C., school, with preparedness games for kids and health information for parents. While the carnival offered fun activities such as bingo, bowling and face painting, it also provided a central message: Everyone needs to be prepared for a public health disaster, no matter what their age.

In eastern Kansas, health workers at the Johnson County Health Department used Get Ready Day to promote preparedness to residents by hosting displays and information tables at two of its county administrative buildings. In Burlington, Vt., health officials held a news conference at City Hall on Get Ready Day to call on residents to take the lead in preparing for emergencies such as pandemic flu. Burlington is one of nine municipalities serving as a pandemic influenza preparedness community as part of the national Take the Lead: Working Together to Prepare Now campaign.

Get Ready Day participants were encouraged to use free materials from APHA's Get Ready campaign as part of their events. Get Ready Day is observed each year on the third Tuesday of September, which is also National Preparedness Month.

How did you celebrate Get Ready Day? Let us know in our blog's comments section. And make sure and mark your calendar for next year's observance on Sept. 15, 2009.
Posted by Get Ready Team, APHA at 4:24 PM 1 comment:

Get smart before using antibiotics 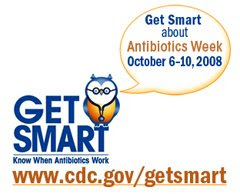 False. All of the above are caused by viruses, and antibiotics do not help fight viruses. In fact, taking antibiotics when you have a virus may do more harm than good.

How? Antibiotics kill bacteria, not viruses. Taking antibiotics when you don't need them or not as prescribed (which means taking all of your medicine even if you feel better) increases your risk of getting an infection later that resists antibiotic treatment. Yet, each year, health care providers in the United States prescribe tens of millions of antibiotics for viral infections.

To bring attention to this growing problem, the Centers for Disease Control and Prevention and partners like the American Public Health Association will be observing Get Smart About Antibiotics Week Oct. 6-10. The campaign will help educate the public about antibiotic resistance and the importance of appropriate antibiotic use.

As we enter cold and flu season, it's important to remember not to insist on antibiotics for treatment when seeing your doctor. If you have a cold or the flu, antibiotics won’t work. Rest and drink plenty of fluids.

And also remember the adage "an ounce of prevention is worth a pound of cure." Try to avoid getting sick in the first place by washing your hands regularly, avoiding people who are sick and getting your flu shot.
Posted by Get Ready Team, APHA at 12:06 PM No comments: