New Get Ready fact sheets help you prepare for emergencies

What should I do if an earthquake or flood strikes? How do I prepare for a heat wave or winter storm? How can I prevent getting H1N1 flu?

If you have any interest in finding the answers to any of these questions (and you definitely should), then check out the seven new fact sheets from APHA’s Get Ready campaign. These educational tools 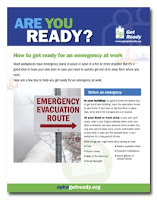 The new fact sheets are available in both English and Spanish. Use the information to educate yourself and your family, pass them out at a health fair, post them on campus or share them in the community. You can even add your group’s logo to the fact sheets on our Get Ready customization page.

Each of the fact sheets teaches you how to prepare for disasters, what to do during the actual emergency itself and how to respond after the crisis has passed. Help spread the word on how to deal with each of these ever-present public health hazards. Get ready and educate!

Headed back to school? New guide offers tips for teaching about emergencies

As summer winds down, everyone knows what comes next: back-to-school season. During this exciting yet anxiety-riddled time of year, students aren’t the only ones who are stressed. Teachers, too, can have a rough time of it as they review class lists and prepare lesson plans.

To help equip teachers for the start of the school year, the Federal Emergency Management Agency has added a new feature to its Ready campaign that provides tips and materials for including disaster preparedness in the classroom. Created in partnership with Discovery Education and the Ad Council, Ready Classroom focuses on three steps for emergency preparedness: (1) preparing an emergency supply kit; (2) making an emergency plan; and (3) learning about types of emergencies specific to an area.

Ready Classroom provides teachers with a variety of grade- and age-specific tools such as games, puzzles, bulletin board ideas and videos , ranging from learning how to call 9-1-1 to discovering how an earthquake works. Another great resource is an interactive map where selecting a state reveals the natural disasters most likely to occur in a region along with links to information on preparing for those types of disaster.

Thanks to this new resource, teaching students about emergency preparedness and protecting them from emergencies just got easier.

Judging from news stories and conversations across the nation, the term “H1N1” isn’t as contagious as the virus itself. Most people still use “swine flu” to refer to the current flu pandemic. The problem is that there already is another type of influenza that is actually called swine flu and it’s totally different.

The real swine flu is a respiratory illness caused by type A influenza virus that regularly causes flu outbreaks in pigs. The important thing to note is that swine flu viruses don’t normally infect humans. Every once in a while a person that is in close contact with pigs will get infected, but these cases are very rare. According to the Centers for Disease Control and Prevention , there were only 12 cases of that kind of flu in the United States between December 2005 and February 2009.

This spring, when people first began getting sick with a new flu virus, scientists called it “swine flu” because tests showed that many of the genes in this new virus were very similar to swine flu viruses. But after they did more research, they found out that actually this new virus is very different from what normally circulates in North American pigs. It has swine flu genes, bird (avian) genes and human genes. So to signify that it was a new virus, the official name became “novel H1N1 virus” and this is the pandemic we’re currently facing around the world.

But don’t worry if you still think “swine flu” rolls off the tongue easier than “H1N1” – even some health officials still have a hard time remembering what to call it. But it’s good to know the difference!

The kids may not be too excited about it, but parents and school staff will probably be glad to know that schools might not need to shut down if there is an outbreak of H1N1 flu, formerly known as swine flu. Updated federal guidelines released today offer a range of options for dealing with H1N1 flu in schools, depending on how bad the flu is in the community.

The new guidance says “officials should balance the risk of flu in their communities with the disruption that school dismissals will cause in education and the wider community.” That means closing schools doesn’t have to be the first response if kids start getting sick. If H1N1 stays at the same level of severity we’ve seen, some of the other recommendations are:

*Stay home when sick: Students or staff members showing symptoms of flu should stay home at least 24 hours after fever symptoms have ended.
*Separate ill students and staff: Students or staff who appear to have flu symptoms should be sent to a room separate from others until they can be sent home.
*Hand hygiene and respiratory etiquette: Schools should emphasize the importance of the basics of flu prevention: Stay home when sick, wash those hands frequently, and cover noses and mouths with a tissue when coughing or sneezing (or a shirt sleeve or elbow if no tissue is available).
*Routine cleaning: School staff should routinely clean areas that students and staff touch. (Watch those door handles, gym equipment and keyboards! Yuk!)

If H1N1 gets worse this fall — with more cases of severe illness, hospitalizations and deaths — the guidelines say that schools should take additional actions.

The new guidelines are part of a national plan to deal with H1N1 flu, which includes encouraging people to get vaccinated and to take other actions to stay healthy. All of these steps are important because flu typically spreads more easily in the fall and winter. However, if we all do our part, we can minimize the spread of H1N1 in our communities.

Posted by Get Ready Team, APHA at 2:57 PM No comments:

Add your preparedness event to the free Get Ready Calendar

Oh wait, there is a way!

Check out APHA’s new Get Ready Calendar of Events. Hosted on the Get Ready Web site, the free public calendar lets you publicize your community’s public health events.

Use it to promote your preparedness-related events, like Get Ready Day on Sept. 15 or Set Your Clocks, Check Your Stocks in November.

Posting your own event on the public calendar is really easy and painless (we promise!). Just click “submit your event,” enter in your event information and contact information, and you’re set!

Once more people begin to use the calendar, you will be able to see what preparedness events are going on in your state and nationwide and get ideas. Plan your own activity using our free fact sheets and ready-to-use materials.

So what are you waiting for? Go on and give the Get Ready Calendar a try!