Get your free CD with Get Ready materials now

Planning a health fair or Get Ready Day or just want to spread the word about being prepared to your community or co-workers? APHA’s Get Ready campaign has a handy tip: For a limited time, we’re offering free CDs containing Get Ready preparedness materials. 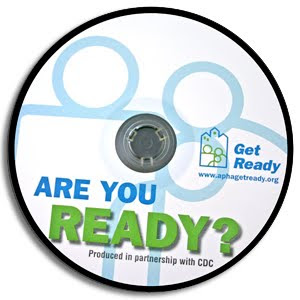 The CDs, which were created in partnership with the Centers for Disease Control and Prevention, contain materials that can be used to promote preparedness in your community, including fact sheets, games for kids, an event planner, logos and more. The materials address a range of preparedness issues, including H1N1 influenza and pandemic flu, disasters, stockpiling and general preparedness. For a preview of some of the materials on the CD, see our fact sheet page. All the materials can be printed out and posted in your community, on campus or in your workplace.

Order a single CD for your personal use, or a few dozen copies to share with workers in your health department or organization. If you are hosting a large event, consider saving trees by offering the CD as a "greener" giveaway.

To order, send an e-mail to getready@apha.org. Let us know how many copies of the CD you would like — large quantities are available — and give us your name, address and phone number. For more information, call 202-777-2432.

This free offer won’t last long, so order your Get Ready CDs today!

Posted by Get Ready Team, APHA at 9:33 AM No comments:

Get Ready Mailbag: Do I need a flu shot if I have had H1N1?

I think I already had H1N1 flu, aka swine flu. Should I still get the vaccine? How do I know for sure that I’ve had H1N1?

Unless you know 100 percent for sure that you had H1N1 flu — by way of a lab-confirmed test — you should still get vaccinated, according to federal flu experts. Most people who have had flu-like illnesses since March 2009 (when H1N1 was first recognized) don’t know for sure that it was the flu, or whether it was H1N1.

If you absolutely positively want to know whether you’ve had H1N1 or any other specific flu strain, you’d need a special test, called the "RT-PCR" to confirm it. Such tests are often used in clinical settings such as hospitals to help health workers decide how to treat really sick patients. However, they aren’t generally recommended for people who’ve had regular flu symptoms and don’t need special care, so your doctor will probably tell you that you don’t need the test.

And even if it does turn out that you’ve had H1N1 — and possibly developed full or partial immunity to the virus — getting the vaccination won’t harm you. Talk to your doctor about whether you should get the vaccination, as certain people are at higher risk of getting sick from H1N1. The bottom line? It’s always better to be safe than sorry.

The emergence of the new H1N1 influenza virus last year grabbed the attention of health authorities and many of the world’s people. This never-before-seen disease spread quickly across the globe, causing illness and death and triggering a major public health response. But while the virus itself is new and unique, some researchers say it is just the latest in a long line of infectious diseases that share common ancestry in the way that they spread.

Infectious diseases are responsible for more than a quarter of deaths annually in the world. Dating back to the earliest days, viruses have had a huge toll on human health. Yellow fever, for instance, claimed 3.5 million lives, and the plague, ominously referred to as the Black Death, killed 50 million people across Europe and Asia in the 14th century,.

Disease experts and medical historians have traced outbreaks of disease through history. In a study last year, (PDF) researchers found similarities in what caused their spread.

The most significant cause found was the movement of humans. For example, disease spread along trade routes. As more and more trade routes popped up, more and more groups of people became connected, enabling disease to spread farther faster. (Just think about the impact of modern air travel.) Poverty and social inequality, and war and famine have similarly affected patterns of movement and the sharing of viruses.

Another common contributor to disease spread was the emergence of new technology and industries. The re-emergence of dengue fever, for instance, was sped in part by the preference of the disease-carrying mosquito to lay its eggs in discarded tires and metal cans.

As our world becomes more complex, opportunities for diseases to emerge are greater. New threats like H1N1 will continue to arise, and infectious disease, as it has throughout recorded history, will remain a challenge to human survival. Lessons learned from both ancient and modern plagues can help us better understand how diseases spread and reduce their impact in the future.

The holidays have come and gone, but flu is here to stay: National Influenza Vaccination Week is Jan. 10–16

2009 might be so last year, but H1N1 flu is still hangin’ around. Influenza is hard to predict and flu experts are warning that we should be prepared for a possible third wave of H1N1, aka swine flu, in the new year.

This Sunday, Jan. 10, marks the beginning of the annual observance of National Influenza Vaccination Week, which health workers, advocates and people like you use to spread the word about the importance of flu vaccinations.

Getting vaccinated is the most important step to protecting yourself, your family and your community, and now it’s your turn. Kick off those healthy New Year’s resolutions by getting vaccinated. The vaccine is now readily available but if you are not sure where the H1N1 shot is available you can check out Flu.gov’s vaccination locator and find the nearest clinic in your town.

Want to spread the good word? The National Influenza Vaccination Week site has free materials in eight languages that you can print out and post at work, at your community centers, in your home or at your place of worship. Share your plans for what you are doing to create awareness or send a friendly e-card reminding those you care about to get vaccinated.

Encouraging more people to get vaccinated could prevent serious illness and death. For more information on what you can do to help, visit Flu.gov. Together, we can fight the flu.

Posted by Get Ready Team, APHA at 5:22 PM No comments:

Make a resolution you can keep: Resolve to be Ready in 2010

Father Time is in the neighborhood again, reminding us to yank those calendars from our walls and replace them with fresh scenes of puppies, kittens and flowers (or even public health!) With the new year also comes a fresh slate of New Year’s resolutions, which unfortunately can be as easy to break as they are to make. 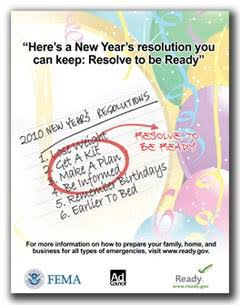 So this year, the Federal Emergency Management Agency, with its Resolve to be Ready campaign, is providing all the tools and resources you need to make emergency preparedness a resolution with staying power. The campaign promotes three important steps: get a kit, make a plan and be informed about the different types of emergencies that can happen in your community.

Whether resolving to help your family, your business, your school or your community prepare for emergencies, the campaign can help you develop internal and external messages about getting ready. Among the many offerings are Web banners and posters, media advisory templates, emergency preparedness quizzes, fact sheets, sample articles and public service announcements about the importance of getting ready for any emergency.

The Web site includes a preparedness newsletter packed with important tips you can share, such as:
• Make sure your family has a plan in case of an emergency. Sit everyone down and hammer out a plan for getting in touch with each other. Decide where you will go and what you will do in an emergency.
• Determine a neighborhood meeting spot, a regional meeting place and an evacuation location.
• Identify an out-of-town emergency contact who can help communicate among separated family members.
• Get an emergency supply kit and be sure to include items such as prescription medications, glasses, infant formula, diapers, pet food and extra water for Fluffy.
• Store important family documents, including copies of your will, insurance policies, identification cards and bank account records in a waterproof, portable container.
• Pack puzzles, games and books for the kids.
• Talk to your neighbors about how you can work together in the event of an emergency.

Remember: Emergencies can happen at any time, so resolve to be ready all year.

Congress gave public health a nice end-of-year bonus this December in the form of more funding to prevent and fight the flu. The new money means that researchers and public health workers will be able to keep more Americans safe from flu threats such as H1N1, also known as swine flu.

On Dec. 16, President Barack Obama signed a law — the FY2010 Consolidated Appropriations Bill — that provided more than $165 billion in funding for federal agencies that deal with issues such as education and health — and also flu. The need for more work on influenza was so important to lawmakers that they mentioned it in an accompanying report to the law, noting that there are "major gaps in our scientific knowledge" of how flu is spread and prevented.

Much of the new flu funding is earmarked for the Centers for Disease Control and Prevention and is designed to tackle some of the lessons learned from the H1N1 influenza outbreak , which has led to more than 1,600 confirmed U.S. deaths and 36,000 hospitalizations.

Among the funds for CDC, more than $874 million was provided in the new law for a CDC immunization program — known as Section 317 — that provides vaccines to uninsured children. Another $15 million was set aside for the National Healthcare Safety Network, an Internet-based disease surveillance system, and $136 million went to a program on emerging infectious diseases.

Lawmakers also remembered health and other workers in the bill, increasing funds for the National Occupational Research Agenda so that the program can continue to keep workers safe from flu while on the job.

Looks like a promising start to the new year on flu funding.