For people living on the Atlantic side of the U.S., hurricane season starts this Friday, June 1. To help prepare, the Federal Emergency Management Agency and National Oceanic and Atmospheric Administration have teamed up to bring you National Hurricane Preparedness Week, which runs May 27-June 2.

Each day of National Hurricane Preparedness Week has its own theme, including hurricane basics, dangers like winds and flooding, storm preparation and after-storm cleanup. Check out the poster below for the schedule, and click through for more information. 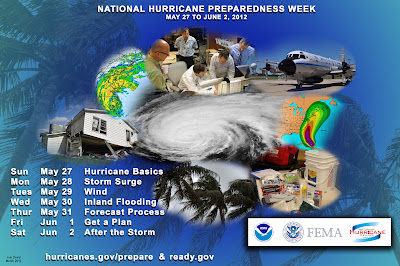 NOAA has predicted that we may see one to three major hurricanes this season. Already this month, two tropical storms — Alberto and Beryl  — have popped up, causing high winds, rains and power outages. That’s why it’s important to prepare now.

Are you ready for a hurricane? Check our fact sheets in English and Spanish (PDFs).

Posted by Get Ready Team, APHA at 3:16 PM No comments:

A new study has found even more good news about the flu shot: It might protect from more than just flu! The study, published in APHA’s American Journal of Public Health, looked at medical records for more than 55,000 pregnant women. Researchers found that women who got flu shots during the H1N1 flu pandemic in 2009-2010 had a much lower chance of delivering premature or stillborn infants. According to the study, when a woman got the flu shot, her risk for delivering a baby before 32 weeks gestation dropped by 27 percent and her chance of having a stillborn baby dropped by 34 percent.

So there you have it: More great reasons for pregnant women to get their flu shots. For more information about pregnant women and the flu, visit the CDC seasonal influenza Web page.

Get ready for warm weather with our new Summer Safe series!

We know it’s not officially summer yet, but the unseasonably warm weather in much of the country has us thinking warm thoughts. And because we’re always thinking about how we can help you be prepared and stay safe, we’re starting a new series of posts on our blog called Summer Safe.

What kind of topics will we cover in our Summer Safe series? Here’s a preview:

• How to stay safe in hot weather.
• Protecting yourself from tick- and mosquito-borne illnesses.
• Tips for staying safe on vacations.
• Information to help you prepare for severe summer weather, including hurricane preparedness.

Do you have any other ideas or burning questions about summer safety and preparedness? Let us know in the comments, or send us a tweet @GetReady!

Posted by Get Ready Team, APHA at 1:50 PM No comments:

For the first time, some of America’s northern neighbors scored themselves on the flu — and they didn’t make the grade.

The British Columbia and Quebec Lung Associations created a Flu Report Card to see how well prepared their provinces were compared to the rest of the country.

Released this week, the report card showed the percentage of adults that received a seasonal flu vaccination during the 2011-2012 flu season. They compared the rate to the percentage of people who reported getting the flu this year. Not surprisingly, provinces where more adults got flu shots reported lower rates of the flu.

Canada’s two most populated provinces, Ontario and Quebec, received the worst grades: D- and F, respectively. Quebec failed because its vaccination rate was the lowest — only 27 percent of adults got the flu shot this year, so one in four people living there got the flu. This is especially bad news considering the weak flu season we’ve had in North America this year.

“Clearly, Quebeckers are not ready for a severe flu season," said Dominique Massie, executive director of the Quebec Lung Association, in a news story.

The report found some good news: 52 percent of British Columbians received the flu vaccine this year, and they reported the lowest rates of the flu, at 10 percent. And overall, more Canadians are getting the flu shot every year. The researchers also found that more people said they would get the flu shot if it was delivered with a smaller needle.

We here at Get Ready think it would be really cool to have a Flu Report Card in the U.S. What do you think? If your state was failing at the flu — or passing with flying colors — would that change your flu shot behavior? Let us know in the comments!

May is Volcano Preparedness Month

Would you know what to do if you were near a volcano that suddenly erupted? May is Volcano Preparedness Month in Washington state, so today we’re talking about what you can do to prepare for a volcanic eruption.

For many people who live in the U.S., volcanoes aren’t the first threat that comes to mind when people think of preparing for a natural disaster. But volcanoes are a bigger deal than you think: Our country is home to two of the 10 most active volcanoes in the world, and the U.S. Geological Survey monitors more than 160 volcanoes and former volcanoes in states that include Hawaii, Alaska and California.

Even if you don’t live near a volcano, you might end up near one if you ever take a vacation in Mexico, New Zealand, Italy or dozens of other countries. Are you convinced yet? Good! It’s time to get ready for a volcano.

For more information about preparing for a volcano, check out our Get Ready fact sheet, available in English and Spanish (PDFs).

Learn more about where volcanoes are around the world from the Smithsonian’s Global Volcanism Program.

Posted by Get Ready Team, APHA at 2:04 PM No comments:

Announcing the winners of our 2012 Get Ready Scholarship

Six students at the high school, undergraduate and graduate level have been chosen to receive scholarships in APHA’s fourth annual Get Ready Scholarship competition.

The Get Ready Scholarship is designed to encourage high school and college students to focus on the importance of emergency preparedness. Students were asked to write essays on various topics related to public health and preparedness. Out of hundreds of essays, the following six were chosen as winners:

Each student will receive a $500 scholarship and a one-year APHA student membership. Read excerpts from the winning essays on the Get Ready website.

Congratulations to our winners, and thanks to every student who submitted an essay!

Posted by Get Ready Team, APHA at 3:46 PM No comments:

Learn how to save lives on World Hand Hygiene Day


Today is World Hand Hygiene Day, an event created by the World Health Organization to educate people about hand-washing to stop the spread of infectious diseases in health care settings.

Check out the video and learn how you can save lives in a hospital, just by washing your hands — and reminding your nurses, doctors and other health workers to do the same!

And don’t forget to check out our hand-washing fact sheets for more information!

Mutant flu research in the news

If you’ve paid attention to the news recently, you may have heard about researchers who created “mutant” bird flu in a lab. Sounds scary, right? Should you be worried about this human-made type of flu?

This so-called mutant flu was created from a combination of two strains of influenza, known as H5N1 and H1N1. The research was going on last year, but didn’t get major attention until December 2011, when the scientists tried to make their results public. Suddenly, the news was full of stories about a potentially dangerous form of flu. In the U.S., the National Science Advisory Board for Biosecurity stepped in and told the researchers that they were not allowed to share the details of their experiments. There were a lot of discussions, with health leaders such as the World Health Organization weighing in. In March, the science board decided to let the scientists publish their results. A team of researchers in Wisconsin published its study this week.

But why did these scientists want to make a mutant bird flu in the first place?

H5N1 is a type of influenza that has been very deadly to humans. It was discovered 15 years ago when a boy in Hong Kong died. Scientists found out that this new flu, H5N1, was carried by chickens. This flu is commonly called “avian” influenza in the news.

Although H5N1 is deadly to humans, it has mostly stayed in birds over the last decade and a half. And so far, H5N1 has not been able to spread from person to person. A few hundred people have died from H5N1 flu, but they are mostly people who come into close contact with chickens and other birds in countries like China, Indonesia, Egypt, India and Vietnam.

What scientists are afraid of is that H5N1 could someday mutate into a type of flu that could spread from person to person. Because humans have not been exposed to this kind of flu, we don’t have an immunity to H5N1, and our current flu vaccines wouldn’t protect us. Scientists fear that H5N1 could cause the next great flu pandemic.

So back to the mutant flu research. The scientists took wild H5N1, which can’t be spread person to person, and mixed it with parts of the H1N1 virus, which can spread to humans (and as we learned in 2009 during the global pandemic, it spreads quickly!) The researchers checked millions of viruses for mutations until they found a virus that could spread in mammals, and then they tested it. What they found was a little scary: It only took four small changes in the H5N1 virus to start spreading in the air.

Were these scientists trying to create a dangerous new flu and start a big pandemic? Definitely not. The research was done to help us understand how flu viruses mutate so that we can better understand how to look for new types of flu — and hopefully stop them from spreading across the globe.

Thanks to these new studies, we now know how easily a person-to-person type of H5N1 flu may develop. But instead of being scared, we should be hopeful, because we’re also one step closer to a better flu vaccine and better ways to monitor the flu.